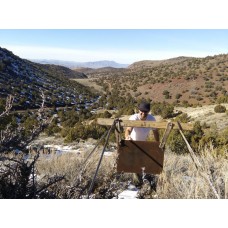 This package deal is aimed (heh) at long range shooters. Using what is normally a pistol rated steel, 1/4" AR400, this package is economical and a 1/3 lighter than an equivalent 3/8" target. However, it must be engaged at much longer ranges than a 3/8” AR500 target would be. The included 10x20” gong has three holes, so that it can be hung vertically or horizontally. Optionally, a second 10x20” plate can be included.